Are closed containment aquaculture the only solution? 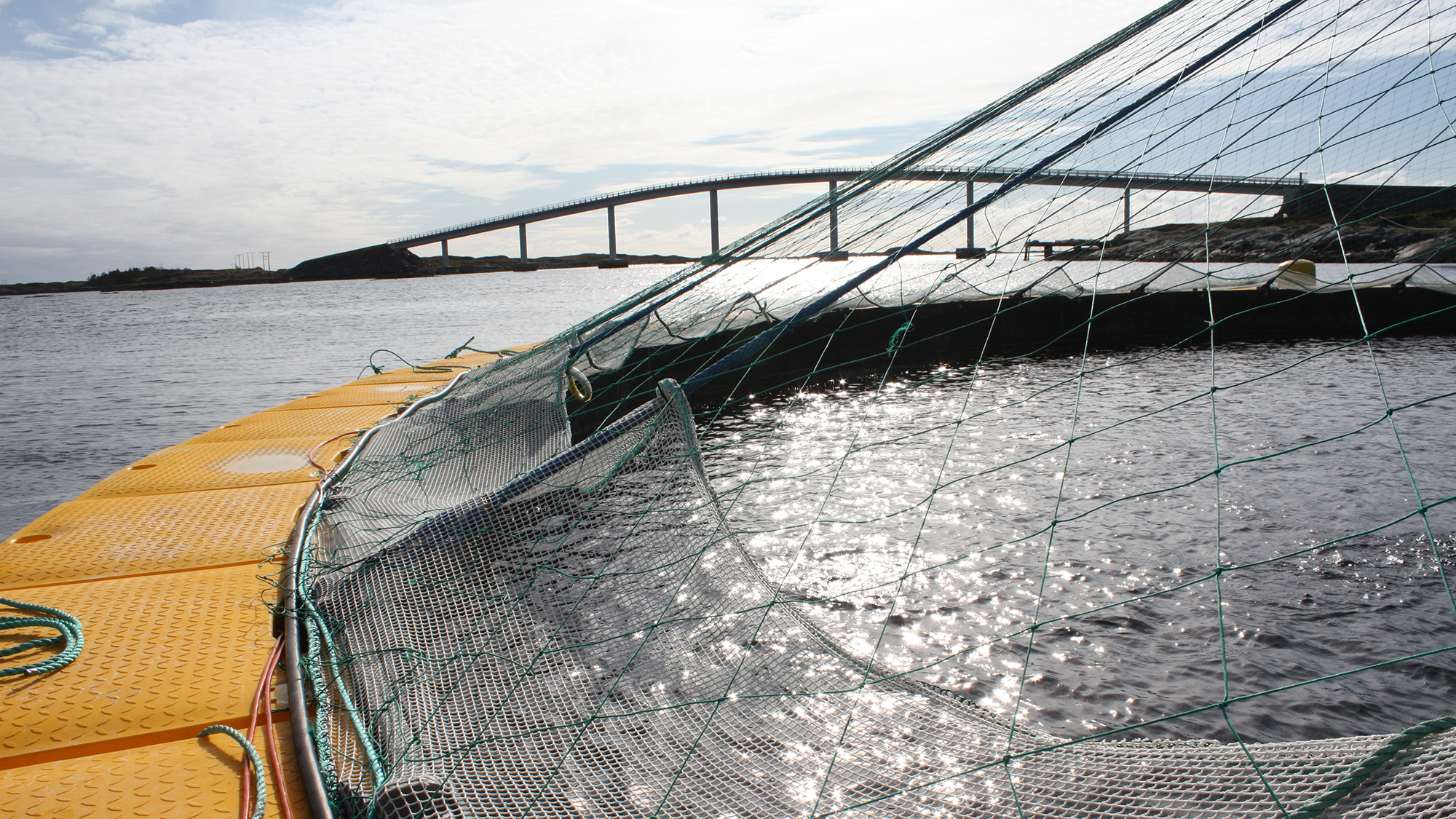 There is a growing interest in closed containment aquaculture (CCA). Many want to know more, and the questions are many: Why do we need CCA? What exactly is CCA? How widespread will they become?

”Closed containment aquaculture come in several varieties. Whether a large proportion of farmed salmon will be produced in closed containment farms in the future depends on which salmon farming structures the government will facilitate, whether fish farmers will be able to carry out production activities within that framework, and whether the market is willing to pay for it. There are both advantages and disadvantages with such closed containment facilities, and personally, I believe many different types of technology will be used for salmon farming operations”, says Åsa Espmark from Nofima.

Espmark is the director of the CtrlAQUA SFI, which is a centre for research-driven innovation in closed-containment farming systems. Here, 21 partners from the research, fish farming and supply industry sectors work together to make CCA solutions become an every-day shelf product by 2023.

“The reason why we are researching closed containment facilities is that the traditional method of open-net fish farming alone will not be sustainable in the future. The fish farming industry must find alternative ways to farm salmon. CCA will make it possible to farm salmon practically without salmon lice and escaped fish, as there will be a physical barrier between the fish and the sea so the lice cannot enter and fish cannot escape. We are now conducting research to find ways to make salmon thrive in such facilities”, says Espmark.

The solutions the CtrlAQUA researchers are working on are land-based facilities and semi-closed facilities at sea for production of salmon of up to 1 kg.

Why stop when the salmon reaches a weight of 1 kilogram?

”CtrlAQUA stops there as it is before the weight reaches one kilogram that we can do anything significant to strengthen the robustness, health and wellbeing of the fish. The rest is, to put it simply, basically a transport stage for the fish to grow bigger”, says Espmark.

Does the fact that not all salmon are kept in closed containment facilities until they are harvested have any negative environmental effects?

“I doubt that. As a salmon is approaching the target weight of five kilograms, it requires far more space than when it is small. With closed-containment farming, the total Norwegian salmon production would require enormous land areas. It would also be very energy intensive and technologically challenging to operate an onshore fish farm with pumps and salt-water recycling, as salmon should preferably live in salt water as it matures”, says Espmark.

“I believe it will have a significant positive impact on the environment if we can reduce the amount of time the salmon spends in the sea by allowing it to spend more of its life in land-based facilities than it currently does”, she says. 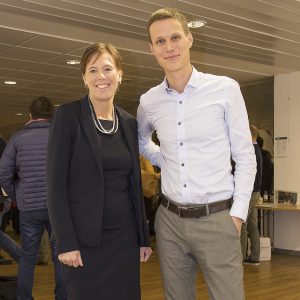 Åsa Espmark and Hans Bjelland from Sintef are each directors of separate SFIs researching the aquaculture technologies of the future. They met at a conference on the future of smolt production at Sunndalsøra last October. Photo: Frode Nerland/Nofima.

Espmark is supported by Hans Bjelland of Sintef, who is Centre Director of the Exposed SFI. They are working with open-water fish pens in locations far from land, known as “exposed aquaculture”. Like CtrlAQUA it is an SFI for exploring the opportunities for the future of aquaculture technology.

“The reasons for working with developing fish farming operations in exposed locations are that there is plenty of space; stable, good water conditions; and greater distance between each fish farming facility, which reduces the infection pressure. At the same time, ocean currents carry away fish faeces and uneaten feed.”

“If we are able to let salmon grow big on land before it’s transferred to sea, we can reduce the time spent at sea from the current 16-18 months down to 10 months, which means we can also avoid the two most severe winter months. Every third salmon that escapes does so during bad weather – and bad weather is more prevalent in winter”, says Bjelland.

Salmon that is to be transported to offshore facilities far from land must be able to endure hours of strong currents and more waves than the salmon placed in net pens in more sheltered environments.

“In the Exposed SFI we are doing a great deal of research on swimming capacity and behaviour. The SFIs are complementing each other in this regard. Whereas researchers in CtrlAQUA are researching health and production efficiency in fish farming in order to produce smolt that can survive the transition to the sea, we also need even more robust smolt that can survive the transition to a more demanding open-sea environment”, says Bjelland.

And finally – Why is the centre called CtrlAQUA?

“CtrlAQUA stands for control in aquaculture production. Being able to control the production environment is key to sustainable farming and healthy salmon in closed containment facilities”, says Espmark. 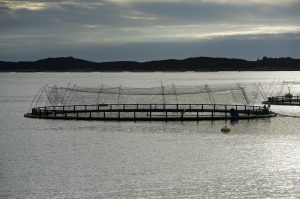 Traditional fish farming is when salmon fry are kept in land-based tanks (in practice a closed containment fish farm onshore) with water flowing through until the fish reaches the smolt stage and weighs around 80–100 grams, after which it is transferred to open net-pens in the sea. The salmon lives there until it reaches its harvesting weight of 4–5 kilograms. Fresh ocean water flows continuously through the net-pen, and the fish living inside are quite subjected to the forces of nature. One drawback to this is that waste and infections are freely exchanged with the surrounding environment. In addition, the walls of the net-pens can be damaged and fish escape. Benefits of such fish pens include the fact that they represent the cheapest method for farming salmon, and allow the fish to live as close to nature as possible. Such traditional farming is by far the predominant method used in Norway currently. 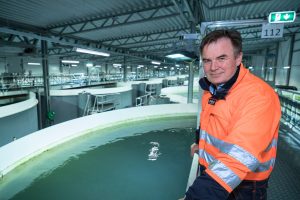 In closed containment facilities onshore it is possible to keep salmon until it reaches its harvesting weight of around 4–5 kilograms. However, at CtrlAQUA we do research on it until it reaches approx. one kilogram; known as the post-smolt stage. Such facilities are also called land-based facilities. They use water-recycling technologies to recycle up to 99.9% of the water used. These facilities require vast land areas and high expertise as well as significant economic investment and control with the technology, water quality, and health and well-being of the fish. We are able to capture more than 98% of the sludge generated in these facilities, but we have yet to find the best solution to dispose of or utilize it. Benefits of land-based closed containment facilities include the ability to completely avoid the issues of salmon lice and escaped fish, the ability to capture and potentially recycle nutrients contained in the sludge, and potentially the ability to produce more robust fish that is more capable of survival. One technical challenge researchers are facing is to supply the recirculation facilities (RAS) with seawater, which is what the fish naturally live in from the smolt stage onward. Further research needs to be done on this. Several large facilities for production of post-smolt (up to 1 kilogram) are currently being built in Norway, and in 2019 the first onshore fish farm will start farming salmon until it reaches its harvesting weight. 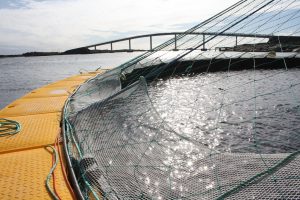 In closed containment fish farms at sea, which we usually refer to as semi-closed due to the fact that they do not contain the waste created, and are thus not completely closed, it is possible to set out smolt and potentially keep them there until they reach a weight of one kilogram. In practice they currently work best as a stopover stage for salmon weighing between 250–500 grams. In research experiments carried out by CtrlAQUA they have succeeded in producing fish entirely free of salmon lice and without escapes, but a number of technical issues remain to be solved. The benefits of closed containment facilities at sea is that they utilise deep sea water from depths where lice cannot live, and they do not require the extensive water purification technology that land-based recirculation facilities do. A solid wall separates the sea environment from the fish on the inside of the facility, and prevents any interaction with the outside environment. Several varieties of prototypes for closed containment facilities at sea exist, but none of them are currently in commercial production. 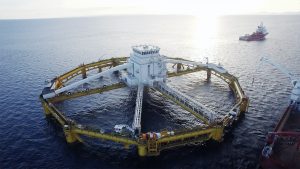 Farming in exposed facilities far offshore is driven by the need for increased space and better production environments. Exposed localities provide more stable growth conditions and greater distribution of waste due to the fact that the sea is constantly in motion. In addition, exposed facilities can be located farther away from the wild salmon in the coastal areas, which can help reduce the negative environmental impact caused by salmon lice and fish escaping from the net-pens. However, this kind of facilities is also associated with challenging conditions for its operations, structures and equipment due to strong and alternating winds, currents and waves, in addition to the increased distance to the facilities. Farming in exposed localities requires new technical solutions combined with operational concepts for maintaining security and ensuring production reliability. Commercial salmon production is currently tried out in experimental net-pens. See https://exposedaquaculture.no/ for more information.