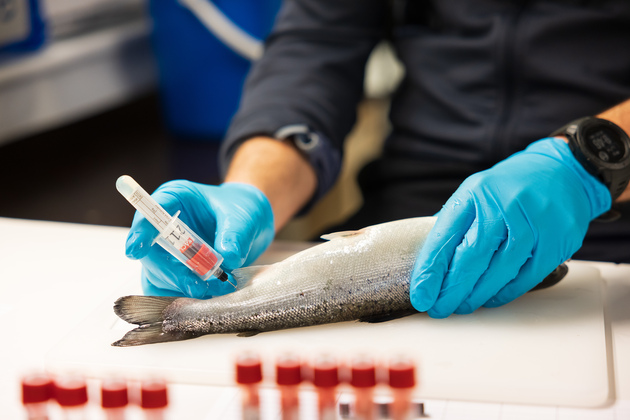 Scientists and students from University of Bergen and Nofima have analysed fish in RAS in this large CtrlAQUA project. Photo: Terje Aamodt / Nofima.

Scientists Trine Ytrestøyl from Nofima and Tom Ole Nilsen from the University of Bergen are trying to find answers.

Testing the effect of RAS conditions on growth at sea

In their trials, which are still ongoing, the salmon were raised in land-based RAS according to various production strategies at Nofima in Sunndalsøra. The strategies involved different photoperiods and the use of brackish water while the salmon are in tanks with recirculating water, and smolt size when transferred to sea.

See sidebar to te right for set up of the trials.

Salmon that are exposed to continuous light in RAS grew fastest while in the RAS facility and were therefore larger when transferred to sea compared to fish that received a winter signal. No obvious negative effects of using continuous light in RAS were seen on growth in tanks with seawater, and they had the highest weight gain during 12 weeks in seawater.

The main finding so far from the trial in tanks with seawater is that the fish also grow well at sea when exposed to continuous light in RAS facilities. The scientists see that an early winter signal in RAS facilities is very positive for growth at sea when the fish are transferred in sea conditions corresponding to the autumn season, i.e. high temperature and decreasing daylight hours, and that brackish water had a reinforcing effect when the fish were transferred at 300 grams.

“The conditions that fish farmers should give the salmon in RAS facilities seem to depend on which time of year the fish are to be transferred to sea”, says Ytrestøyl.

Early sexual maturation in male salmon is a common problem when the fish are exposed to high temperatures in RAS facilities. Very few of the fish that were transferred to sea at 100 grams became sexually mature early.

When salmon were transferred to tanks with seawater at 300 grams a larger proportion of the males were sexually mature when the sea trial ended.

Scientist Tom Ole Nilsen is not surprised that large smolt have certain challenges that traditionally smaller smolt do not have.

“When you work in unison with the salmon’s physiology, it is natural to assume that the risk of adverse episodes during the seawater phase is lower. We see somewhat earlier sexual maturity and also more incidents of the disease nephrocalcinosis in fish raised in RAS facilities until they are as large as 300 and 800 grams, compared to 100 grams. Therefore, it is important that we take biology into account when choosing a strategy”, says Nilsen.

So far in the trial, the lowest mortality rates have been seen in net-pens at sea where the transferred salmon were 100 grams. 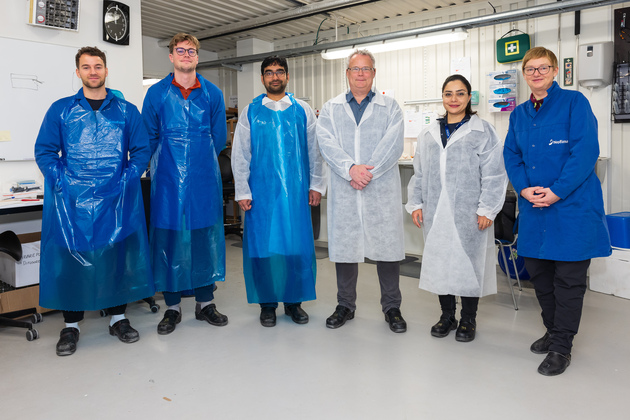 Scientists and students from University of Bergen and Nofima teamed up to analyse fish in RAS. Tom Ole Nilsen in white coat and Trine Ytrestøyl in blue. Photo: Terje Aamodt / Nofima

Is there anything one should avoid doing?

“Based on the results from this trial, I would not give a late winter signal, i.e. at 120 grams, to a fish that is to be transferred when it is 300 grams. It seems to have a negative effect regardless of the season and temperature when transferring to sea, but it will be exciting to see how the fish cope in net-pens at sea up until slaughter size”, says Ytrestøyl.

The research conducted in CtrlAQUA confirms what we have heard before, that all roads lead to Rome.

“Fish farmers that are interested in the details should keep an eye on our work. There are lots of important factors that we can tell much more about”, concludes Ytrestøyl.

The setup of the trials:

To stimulate smoltification, the salmon are controlled by light rhythms, and the scientists have simulated nature’s winter signal and compared it with continuous light in the production of large smolt. The winter signal in these trials has been 12 hours of light and 12 hours of darkness for six weeks and was given at an early phase when the smolt weighed 50 grams, and later on when the smolt weighed 120 grams. Continuous light during the trials has corresponded to 24 hours throughout the entire period in RAS facilities.

The salmon were transferred to cages at sea in Nordland County when they were just over 100 grams, 300 grams and 800 grams. In addition, parallel groups of fish were placed in flow-through tank systems with seawater at Sunndalsøra. Here, the fish were exposed to light and temperature conditions that simulated a transfer to sea during the autumn and spring for a period of 12 weeks. The salmon transferred to tanks with seawater in January at 800 grams have not been in the seawater long enough to be measured. This means that at the moment, the scientists only have growth results from transfers to sea of 100 gram and 300 gram fish.