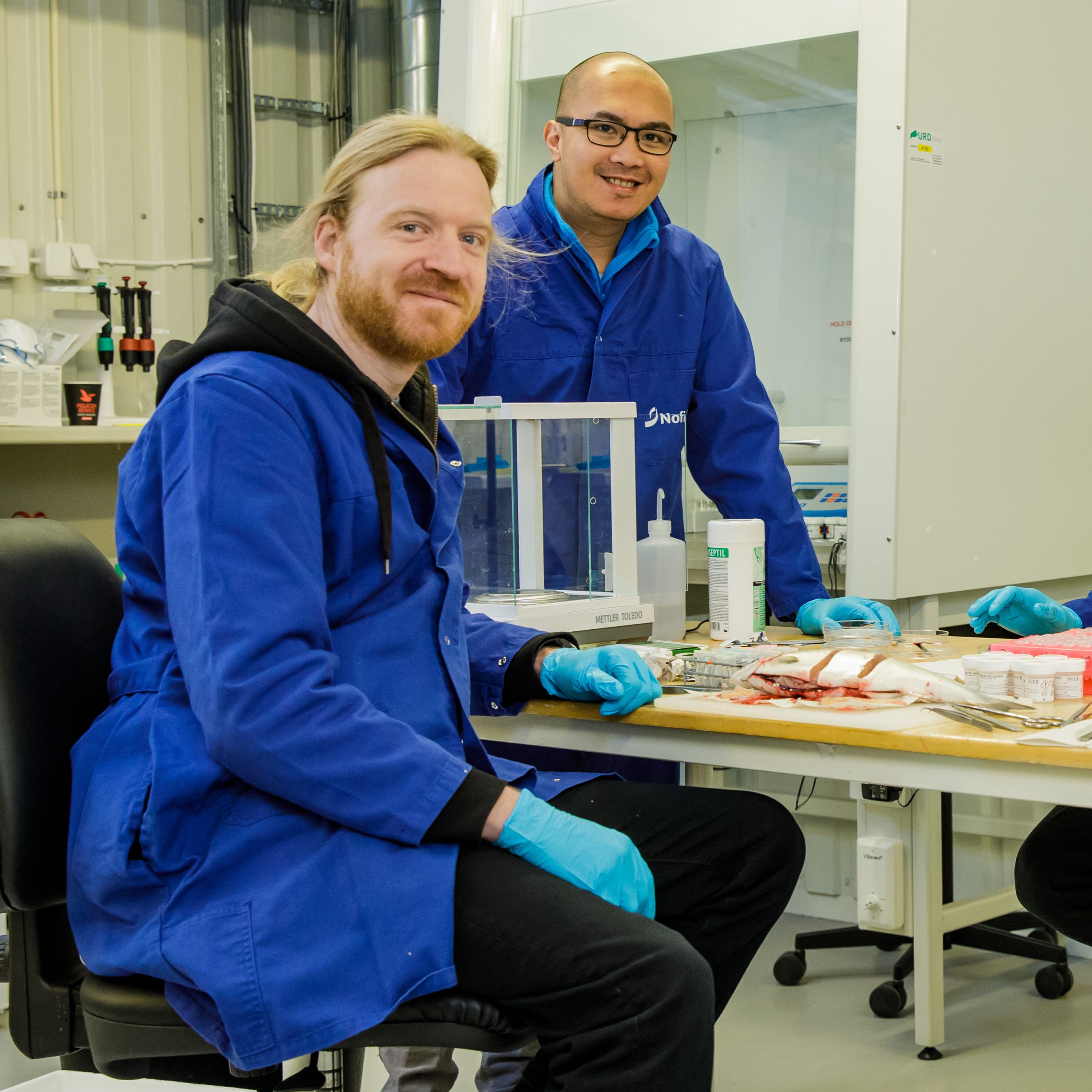 The research was carried out by Nofima’s Gerrit Timmerhaus and Carlo Lazado, accompanied by their colleague Lill-Heidi Johansen was the Project Manager. Photo: Terje Aamodt©Nofima.

It is well known that smolt grow faster in recirculation systems when the current increases. CtrlAQUA researchers have now discovered that it is primarily the muscles, rather than the other organs, which grow when salmon swim in a strong current. This is a positive thing. At the same time they believe that there is reason to keep an eye on any impairments in fish welfare until they know more about the effects of strong currents.

The aim of this project, named CARDIO, was to find the optimum water speeds, or currents, for smolt in recirculation systems.

The researchers divided post-smolt weighing 80 g into groups that would swim for three months in water flowing at four different speeds. Post-smolt are salmon which just have passed through the smoltification stage and have become adapted to the sea.

The researchers wanted to test to see what happens to salmon physiology at different water speeds and whether or not there are any upper speed limits. Water speed is measured as body length per second.

− We tested this very high water speed because we were interested in the physiological response of the fish,” says fish health researcher Gerrit Timmerhaus at Nofima.

He believes that it is not realistic to introduce water speeds that are much higher than the present day standard in existing recirculation systems because this requires special equipment and powerful pumps suitable for achieving such high speeds. He also doubts if it would pay off, even if it did result in increased growth.

Photos showing muscle fibre in post-smolt in weak current on the left and very strong current on the right. The muscle fibers were smaller and elongated in low current and larger and rounder in high current. Photo: Carlo Lazado © Nofima.

Even through producers want a high percentage of muscle and rapid growth, the researchers do not know how this actual type of salmon would manage during the growth phase in the sea, and whether or not a low condition factor would be compensated for in the salmon by muscle growth at a later stage. One finding in a previous trial conducted at Nofima showed that strong currents result in increased resistance to diseases in the sea.

Salmon swimming in strong currents swim in shoals and the researchers think that this is a sign that they are optimising their use of energy. The skin damage recorded included scale loss and hemorrhagic patches, and not damage that was directly harmful to health in itself.

− Based on this research and previous research conducted at Nofima, I believe that it is optimal for fish to swim at speeds somewhere between 1 and 1.8 body lengths per second. Anything below 1 means that their growth potential is not utilised and they do not build up resistance to disease, and at speeds above 1.8 we risk making compromises with the health of the barrier tissue of the fish,” says Mr. Timmerhaus.

This research, which represents a step towards acquiring more knowledge about salmon yields and welfare in closed-containment systems, was conducted at the Norwegian Centre for Research-based Innovation, CtrlAQUA SFI, in Sunndalsøra.