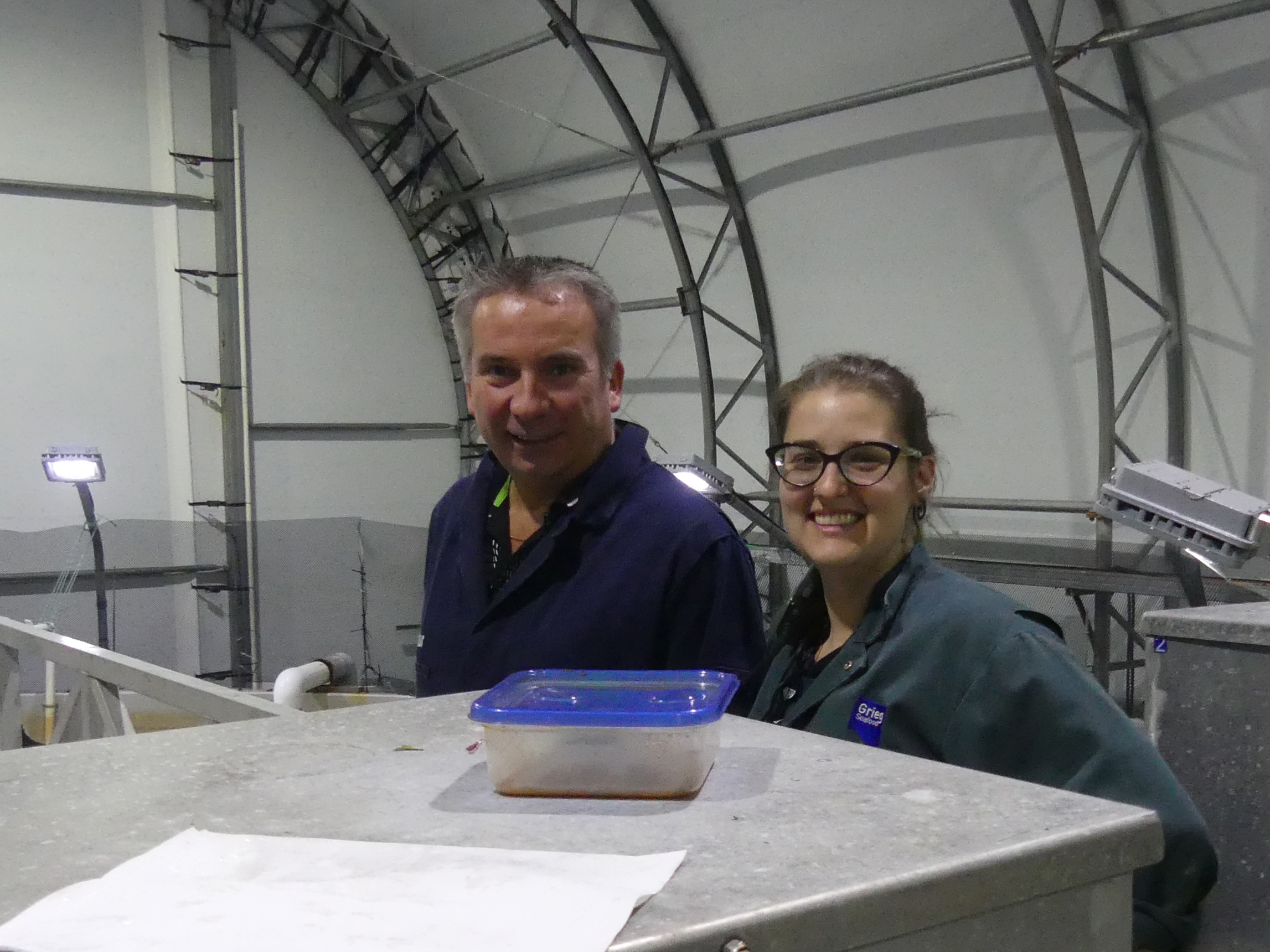 Frode Mathisen with a colleague at the RAS facility in Canada, where testing of the production regime started. Photo: ©Grieg Seafood.

Even before the results of the CtrlAQUA project about optimal production regimes appeared in any report, Grieg Seafood was implementing the knowledge at its RAS facilities in Canada.

”This knowledge from the CtrlAQUA project concerns which light regimes and water qualities provide the best smolt output in recirculating facilities. The former chairman Frode Mathisen* of Grieg Seafood quickly took interest in this knowledge, which he enthusiastically conveyed to the partners during CtrlAQUA’s annual meeting in May 2019:

“I am very interested in telling you about how we implemented this innovation in our production, because that is what CtrlAQUA is all about,” Mathisen said.

He wanted to show how a rapid impact of innovations in one’s own business could be achieved if one paid attention and that innovation in a SFI is most often knowledge, rather than something you can actually put your hands on.

As the manager of a freshwater facility in Canada, Frode Mathisen wanted to deliver large, robust post-smolt to sea farming, and therefore chose to test out salmon production with 24 hours of light and salt water in a separate production batch in 2017, with some adaptations.

And so it went on

At the end of 2019, Production Manager Arvid Pedersen at Adamselv in Finnmark could tell that they had a close dialog with Mathisen regarding the hypothesis, and that they tested this more or less in parallel with both Canada and CtrlAQUA.

“And it was very good that we could rely on empirical scientific data from CtrlAQUA when discussing this,” says Pedersen. Grieg Seafood has also produced some groups at its facility in Trosnavåg, Rogaland, with traditional light management and some with 24 hours of light right up until delivery in 2019. They monitor these groups closely during the sea phase, especially with regard to sexual maturity.

“There is no doubt that we achieve better growth at our facilities now. It appears as if this continues in the sea, but it is still a little early to draw any conclusion. We will continue with the same light strategy in 2020, and we will eventually see what is right based on the results from the sea phase,” says Pedersen.

In Canada, Grieg practices the new regime with 24 hours of light at all of its RAS divisions there.

As a very active partner in CtrlAQUA, Frode Mathisen was always looking for useful results like this. He is described by the partners in CtrlAQUA as someone who always sat in the front row paying attention, who was inclusive, who shared his experiences and who was interested in the major issues in the CtrlAQUA project and aquaculture in general. Frode Mathisen will be remembered as a dedicated chairman of CtrlAQUA and an active disseminator of research and the fish farmer’s perspective.