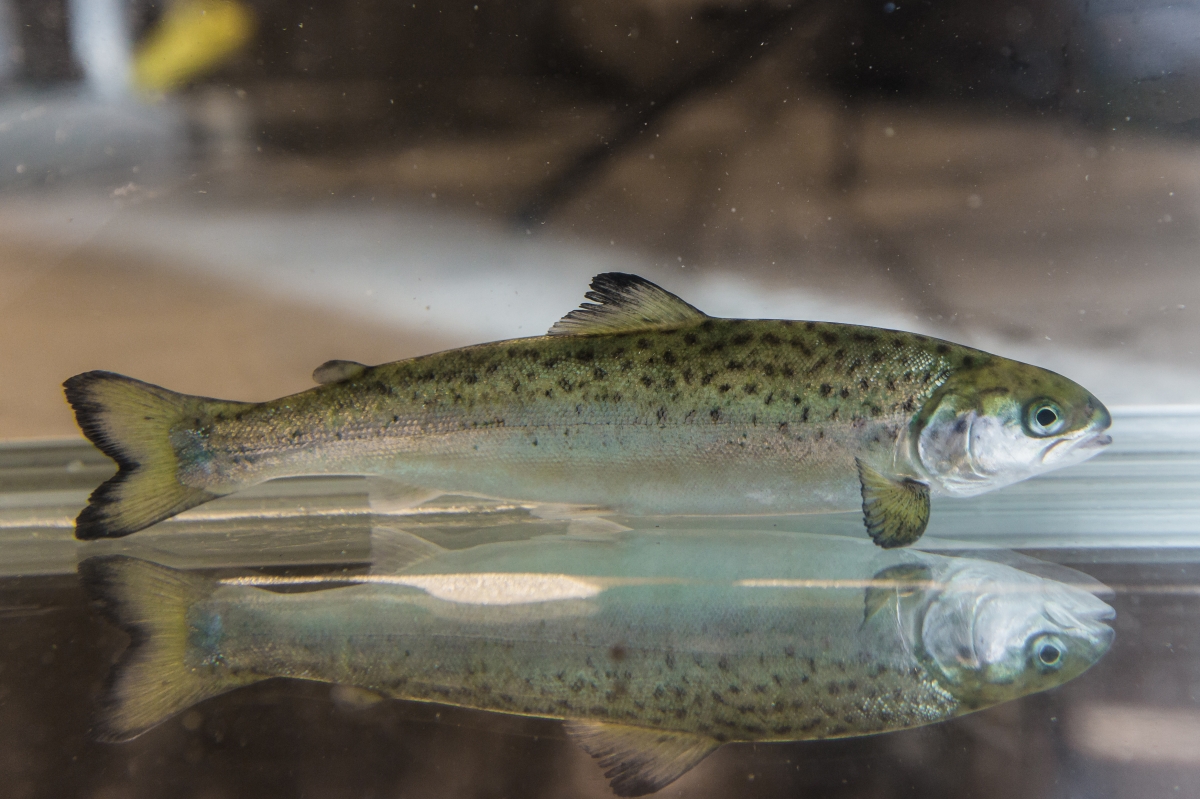 - As far as the fish are concerned, it is best for them to live in open cages.. We therefore need to continue conducting research on making this sustainable, says the author of the article. (Photo: Terje Aamodt/Nofima)

Closed-containment onshore fish farming systems are being heralded as the answer for farmed salmon, but we need to proceed cautiously – and ensure that fish welfare and health remains a key aspect of Developments.

By Asa Maria Espmark, Senior Researcher and Director at CtrlAQUA SFI, which is a centre for research-driven innovation on closed-containment aquaculture systems.

In the salmon debate, both politicians and debaters have referred to closed facilities as being the solution for future salmon production. The thinking is that such facilities will solve challenges such as sea lice and the risk of escape.

Those of us conducting research on closed-containment systems are following developments with great interest and we are keen to assist with what we can. But we do not wish to conclude that closed systems might be the only way to farm salmon.

I am the director of CtrlAQUA, a centre for research-driven innovation, which has been set up by the Research Council of Norway and is the largest overall research community engaged in research on closed facilities. There are 20 partners involved from the fields of research, fish farming, pharmaceuticals and technology provision, and we wish to contribute towards ensuring that closed systems are profitable, reliable and sustainable.

We have been conducting research on this for four years, and we have four years left. So now that we are halfway through the process it might be a good idea to sum up what we can realistically hope to achieve, because there is still a lot we do not know about these new technologies, not least what it would be like for the fish if they were never again able to swim in the open sea. 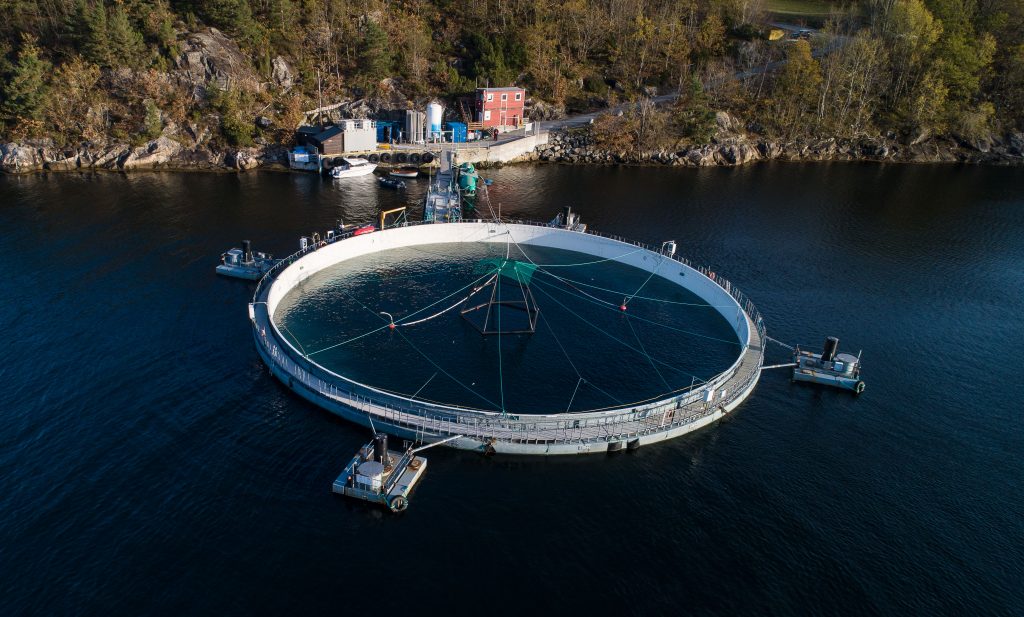 Closed sea cages from Aquaform Equipment which are so far producing favourable test results. They can contain a maximum of 1 million salmon weighing up to one kilo. (Photo: Magne Langåker/Aquafarm)

We are at a crossroads

Salmon farming has developed rapidly between the 1960s and the present day, and practically all the 1.3 million tonnes of salmon produced is farmed in the same way.

Traditional farming takes place by hatching the salmon roe and then keeping the young salmon in freshwater facilities onshore until they weigh 80-100 grams. They are then moved to mesh pens in the sea where they remain until they weigh 4-5 kilos, after which they are transported to the slaughterhouse. During the course of the first 12-18 months in the pens the fish face a number of challenges, most notably sea lice and the risk of escape.

These challenges for Norwegian fish farming have now brought us to a crossroads. We are moving away from using just one method to produce salmon, to having several different versions.

Using closed systems is one version where a physical barrier exists between the water in which the fish live and the external environment. The farmer is in control of whatever enters and leaves the facility, and should thus be able to prevent sea lice from entering and salmon from escaping. Closed systems also ensure that it is possible to keep the salmon away from the open sea for longer, and thus away from encountering sea lice.

In CtrlAQUA we are working with closed systems until the salmon weigh around one kilo. This comprises onshore facilities which use water recycling technology, and partially closed facilities in the sea where water is pumped up from a depth which is below the lice layer. Salmon biology undergoes considerable changes before the fish reach a weight of one kilo, but after that they generally only become larger.

Recent focus has been directed at closed onshore facilities where salmon are kept right up until they are slaughtered. This is a new way of producing salmon, and there are a few facilities which are already operating. This is not common in Norway yet, but several farmers are planning new facilities. Technically it is quite possible to keep salmon onshore until they are slaughtered, but it is too early to say what impact this will have on fish health and welfare.

We know a lot about the technological challenges involved in closed-containment onshore facilities, but it is hard to predict how these challenges would affect the fish in the long term when they are never released into the sea.

For biologists our first priority is what is best for the fish. It is important in this respect that technology is able to develop at a pace where we can keep an eye on how the fish are able to tolerate not having access to the sea, but are instead forced to live onshore throughout their lives.

The responsibility for ensuring the right pace of development rests with the industry and the authorities. In our capacity as researchers we can only insist on proceeding slowly. We need to resolve the challenges posed by sea lice and escapism, but this must not occur at the expense of fish health and welfare.

As far as the fish are concerned, it is probably best for them to live in open cages – so we also need to continue conducting research on ensuring that this is sustainable and call for research funding to be devoted to this as well.

Another debate which should also take place is how extensive do we want the closed onshore production to slaughter process to be.

We know that large-scale onshore salmon production would require a lot of land. A report prepared by Sintef and partners in 2018 contained calculations showing that full transition to onshore farms would require almost 12,000 m2, the equivalent of the size of Tromsøya.

The authorities want Norwegian salmon production to increase over the forthcoming years, and any such increases could not occur by using open cages alone due to the challenges entailed.

Increased production needs to take place in a safe, sustainable manner, taking the conditions of the fish into account. If we are to do this safely, the industry needs to work systematically in cooperation with the research community and the authorities.

Fresh fish with space to exercise

We know that results are achieved thanks to the close cooperation which exists between researchers and the industry. CtrlAQUA is working on the problems involved and is focusing on technology optimisation and fish welfare and health. Here are four examples of what we are working on:

1) Due to increasing system volumes and complexity, we may face challenges relating to the distribution of good-quality water. If the water quality is right, the fish can use the entire volume and have access to feed and good-quality water, no matter where they are.

2) During the phase when the fish are usually transferred to the sea, their immunity is low. One unresolved question in this respect is whether or not keeping the fish onshore for a bit longer might make this transition a bit safer. We are working on ensuring that the fish are strong, so that they can withstand any essential handling and stay healthy.

3) Fish need to exercise, just like people. Consequently it is important to ensure that they have the right velocity of water so that they will have the exercise they require in order to remain healthy.

4) Increasing our knowledge about the necessity of and the technology for purifying large quantities of water running into large farming systems.

After four years of research some new challenges have also surfaced. One example is the formation of hydrogen sulphide in closed systems containing brackish water and sea water, something which can cause high levels of fish mortality.

New fish farming technology has great potential. If Norway is to succeed with its ambition to increase salmon production, we need to embrace new technologies and continue working on adapting them to suit fish biology.

However, such major growth should take place in open cages, and it is important to ensure that we continue conducting research on making these systems sustainable. We need to continue working on prevention so that sea lice are unable to encounter or attach themselves to the fish, so that the fish are unable to escape, and so that as little waste as possible ends up in the sea. Open cages, with a minimal footprint and maximum profitability given certain conditions, is the most natural solution for salmon.

However, increased production means that other solutions are now relevant and right. We need a diverse technology base, including open and closed systems, and some leading up to slaughter, and offshore farming systems where the facilities are located far out to sea.

Different systems cover different requirements in different regions with different challenges. With a diverse technology portfolio, Norwegian fish farming will have several legs to stand on and it will be able to tailor production in line with the requirements of the Fish.

This opinion article was first published in Norwegian at Forskning.no 13 August and Nordlys/Nordnorsk Debatt 17 August 2019.