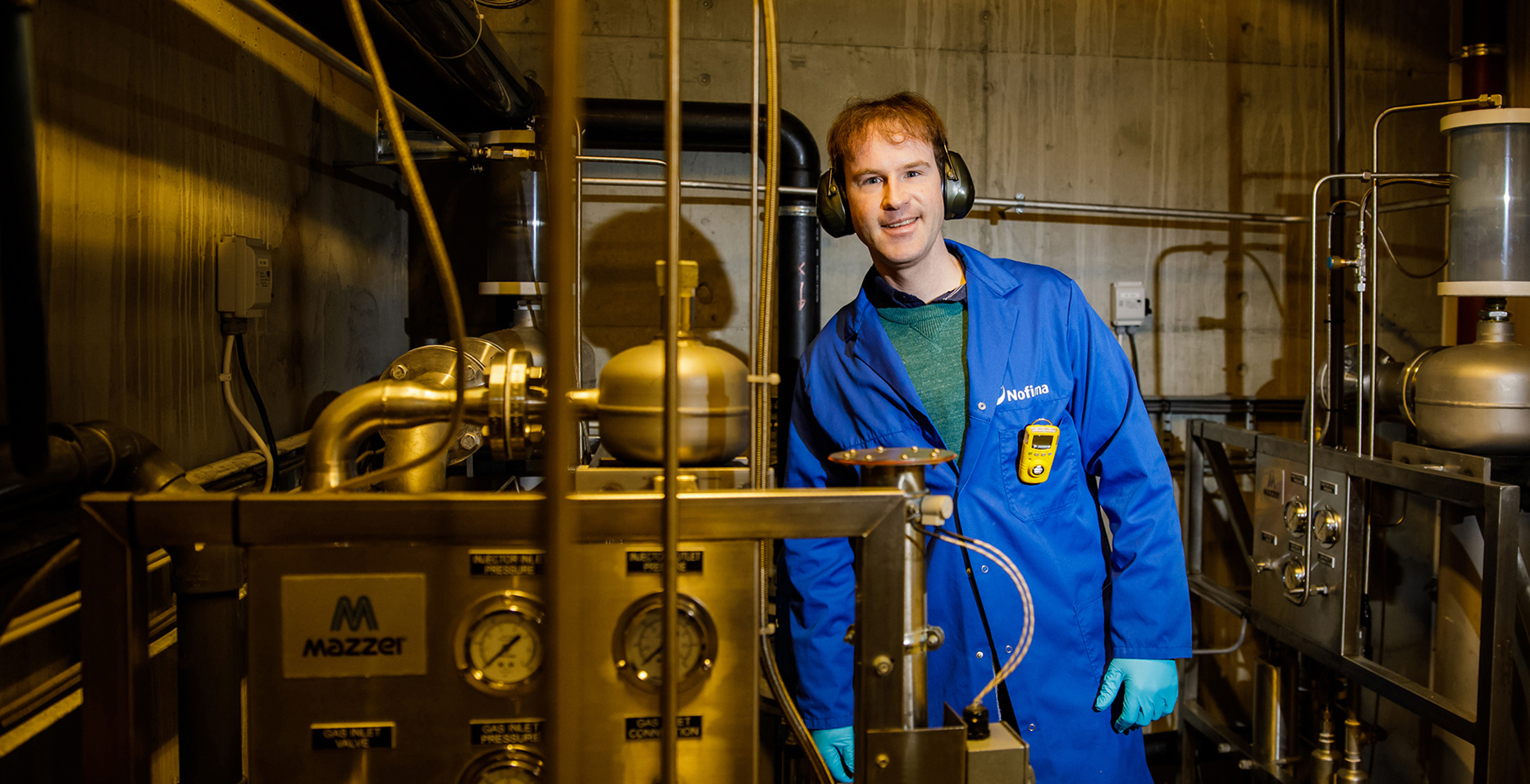 Kevin Stiller first authored a paper defining the threshold of ozone in brackish water. Here he is at the control room of Nofima’s RAS facility at Sunndalsøra. Photo: Terje Aamodt@Nofima.

Scientists have determined that salmon post-smolts tolerate similar level of ozone in brackish water as they do in freshwater.

Ozone is a strong oxidant commonly used for improving water quality and disinfecting pathogens in freshwater fish farms. When ozone reacts with certain constituents of seawater, however, toxic byproducts can severely impact the health of fish populations. As brackish water is increasingly introduced in farming post-smolt salmon, thresholds for the safe use of ozone need to be established. Suppliers of recirculating aquaculture systems (RAS) are looking for safe, cost-efficient and reliable ways to maintain optimal water quality in brackish water RAS, and with this research they are now a step closer.

Scientists from Nofima (Norway) and The Conservation Fund Freshwater Institute (TCFFI, USA), both central in CtrlAQUA (Centre for research-based innovation), wanted to determine if ozone is safe for salmon in brackish water, and what the safe limits are for post-smolts.

The scientists carried out a trial determining the ozone limit in a flow-through system. Atlantic salmon at 100 grams were for 12 days reared in brackish water of 12 ppt (parts per thousand) salinity. They were exposed to ozone levels of 250 (control), 280 (low), 350 (medium), 425 (high) and 500 (very high) mV (millivolts). They identified ozone levels up to 350mV as potentially safe and 300 mV as safe for the health of post-smolts in flow-through brackish water.

In a follow-up study by Nofima that is not yet published, the identified threshold was confirmed for RAS. Carlo Lazado, fish health researcher in Nofima, will present the results at the digital conference “Smolt production in the future” 21st October.

“This would depend on the quality of water being treated but in our experience in replicated freshwater RAS, a lower ozone level of 290 mV still resulted in significant improvements to water quality in general, including reduced biochemical oxygen demand and increased UV transmittance”, Good says.

“This new publication from CtrlAQUA highlights the effects of different ozone doses on the fish, therefore complementing our work here in the US on the water quality.”

Observed effects of too much ozone

The scientists also tracked indicators of fish welfare, such as genes important for antioxidant defense and quality of skin and gills.

“What surprised us, was that ozone is much more aggressive on the gills compared to the skin. It means that gills are a good indicator tissue to check out the sensitivity to ozone”, says Lazado.

Color of the water in the tank during the ozone trial shows the turbidity with (left) and without (right) ozone addition. Photo: Kevin Stiller@Nofima.

The recommendation of being below 350 mV for 100 gram post-smolt salmon in brackish water is consistent with ozone thresholds for other farmed fish species, and for salmon post-smolt in freshwater.

“When relying on this limit it requires that measurements of ozone in the production facility are accurate and reliable”, says Kevin Stiller, RAS-researcher in Nofima.

In the research trial, the scientists needed to take the average from two probes to accurately measure the ozone level. That might also be a tip for the industry when measuring ozone level using today’s technology.

Stiller’s and Good’s experience is that both in Norway and North America you will typically see ozone application at less than 350mV in commercial RAS facilities.

Should ozone levels become toxic to fish, the morbidity and mortality is primarily the result of gill malfunction. The effects are observable to the naked eye, with increased respiratory rate and fish crowding near oxygen-rich tank inlet water.

View the scientific article “The Effects of Ozone on Atlantic Salmon Post-Smolt in Brackish Water—Establishing Welfare Indicators and Thresholds”.